I don’t have a clue what the contractors were thinking on the day of laying bricks. I got a message asking “how high the window sills should be?”

I was baffled by the question and said I’ll get back to them. I then thought they were referring to the bay window and asked them to check the plans.

I was wrong. We get photo updates at the end of the day. They had laid too many bricks.

Below is a photo showing what they completed that day.

Notice something wrong? The below may give you a clue. 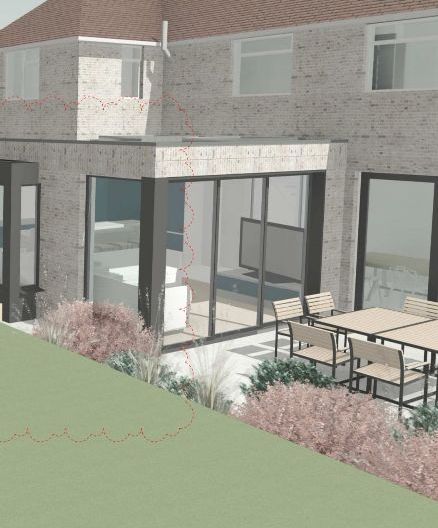 Why are there bricks where the floor to ceiling window is? The builders had bricked up to a height where a standard window will be installed. That day they also asked me how many bricks should be on either side of the bi-fold doors. They sent me a picture (below) and I wasn’t impressed with their suggestion. Two and a half bricks on either side to make it look symmetrical. I was at work and couldn’t check the plans at that point in time. I replied saying fewer bricks on the left leaving the bi-fold door and window around the corner closer, giving it a narrower frame. I still wasn’t happy about it. Something was playing in my mind but I couldn’t pin it down. It was only when my wife asked about the floor to ceiling windows and I checked the plan did it dawn on me that it’s not right.

The photo below was sent to me at the start of the day before they had laid the bricks.

When they undid their work it looked like the below on either side of the bay window.

Unfortunately, the drama didn’t end here. I looked at the architects and engineers plan to find there should be a steel post in the corner. I tried to study it and find the solution online.

The next day was a Saturday and we went straight to the house. Another mistake. They have wasted expensive bricks on sections that will have aluminum cladding. The builders say it will give us the option to take the cladding off in the future. Mmmmm, it’s a little more complex than that but I’ll explain in another blog post.

The list gets a bit longer. While we were there I measured the height of the bay window only to discover they had put one extra row of bricks. It was not to the specification of the drawing which states 500mm height from ground level. Looking at the photo below with the measuring tape, the ground level starts from the top of the engineering bricks (membrane layer).  They had to remove the layer.

Below is the final image of the day and the plans. The contractors decided to wait until they get all the posts and beams before continuing as it will help them understand it better.

Bay windows with one row of bricks removed. The bricks were up to the same level as the insulation before we arrived.

Below are the architects and engineering plans. 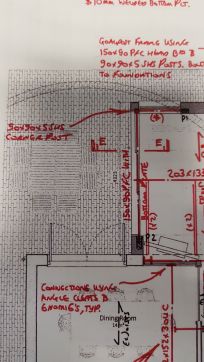 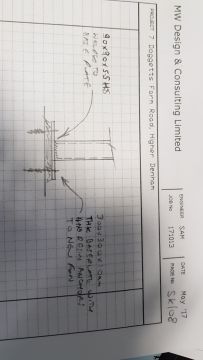 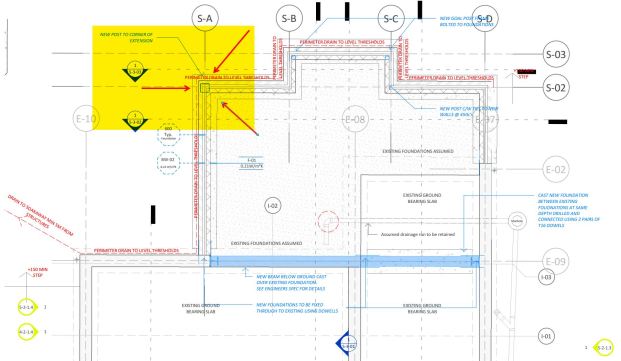 Let’s re-evaluate and see what happens from here. That was one hell of an off day for the builders. Shit happens. It’s important we move on. The contractors are still very good and one of the best teams I’ve seen work together.